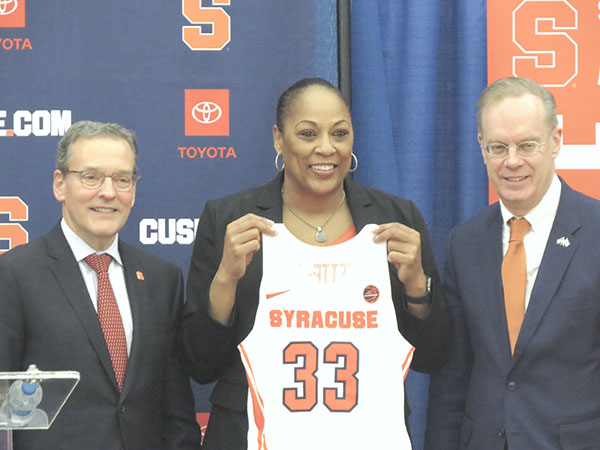 On March 28, Syracuse introduced Legette-Jack, 55, as the team’s 7th head coach at a press conference held at the Carmelo K. Anthony Basketball Center.

She will coach a team that now plays its games in the Carrier Dome, unlike when Legette-Jack adapted to Syracuse’s women’s team in the 1980s and was a standout performer in games played at the Manley Field House.

“Coach Legette-Jack is the right person at the right time to lead this program,” John Wildhack, athletic director at Syracuse University, said in his remarks at the March 28 event. “She deserved and deserves this opportunity.”

The introduction comes just months after Legette-Jack became the first woman in Syracuse basketball history to have her jersey retired when her No. 33 jersey was hoisted to the rafters at the Carrier Dome on Nov. Last year.

Legette-Jack, a Syracuse native, returns to his alma mater after serving as head coach of the women’s basketball team at the University at Buffalo. The Bulls lost to Tennessee in the first round of this year’s NCAA Women’s Tournament. It was the fourth NCAA Tournament appearance for Buffalo under Legette-Jack.

She takes over as head coach from Vonn Read, who served as interim coach of the women’s team last season after former head coach Quentin Hillsman resigned following allegations of inappropriate behavior in the program.

“Coach Read is a great basketball coach and a good person,” Wildhack said at the press conference. Read led Syracuse to an 11-18 overall record (4-14 ACC) in his only season at the helm.

In his remarks, Wildhack said he was “smitten” when Legette-Jack told him she watched “every minute of every game” the Syracuse women played last season.

She also laid out her vision in a press release from Syracuse University.

“My goal is simple: pursue championships in the classroom and on the basketball court. We will build our program with our CAB philosophy: character, studies and basketball. We will work tirelessly to help our team understand that character will always come first, academics will be up close and we will find the best athletes in the world to make you all proud,” said Legette-Jack.

She brings a resume of her basketball accomplishments to her new role as head coach of the Syracuse women’s team.

As a player, Legette-Jack led Syracuse’s Nottingham High School to two state titles before attending Syracuse University, where she was a standout player on coach Barbara Jacobs’ 1984 squads. to 1989.

During his playing days, Legette-Jack earned Big East Freshman of the Year honors after helping lead the Orange to their first Big East championship in school history. She finished her career as the program’s all-time leader in points, rebounds, field goals made and attempted, and free throws made and attempted, Syracuse said.

After earning a bachelor’s degree in child and family studies and psychology at Syracuse in 1989, Legette-Jack began her coaching career at Westhill Senior High School in suburban Syracuse in 1989.

She moved to the college level as an assistant at Boston College (BC) from 1991 to 1993. After her stint in British Columbia, Legette-Jack returned home to Syracuse as a staff assistant coach Marianna Freeman from 1993 to 2000. She left in 2000 to become an assistant coach at Michigan State for two seasons, before landing her first head coaching job at Hofstra in 2002.

Named head coach at Indiana University in 2006, Legette-Jack led that program for six years. She led the Hoosiers to back-to-back Women’s National Invitation Tournaments (WNITs) in her first three seasons, including a 20-win season and a WNIT quarterfinal appearance in 2009.

His time with the Hoosier program ended in March 2012 when Indiana fired Legette-Jack after a 6-24 season, according to a March 12, 2012 article on ESPN’s website.

Later that year, she returned to Empire State when Legette-Jack was named head coach at Buffalo.

In addition to his retirement from the Syracuse jersey, Legette-Jack is enshrined in several halls of fame, including the Greater Syracuse Hall of Fame, the Syracuse Urban Sports Hall of Fame, and the Orange Plus Hall of Fame. from Syracuse University. She was named to the Big East Silver Anniversary team in 2004, the school said.

” I thank you all. I don’t have many words to say other than…let’s get to work,” Legette-Jack said at the press conference.