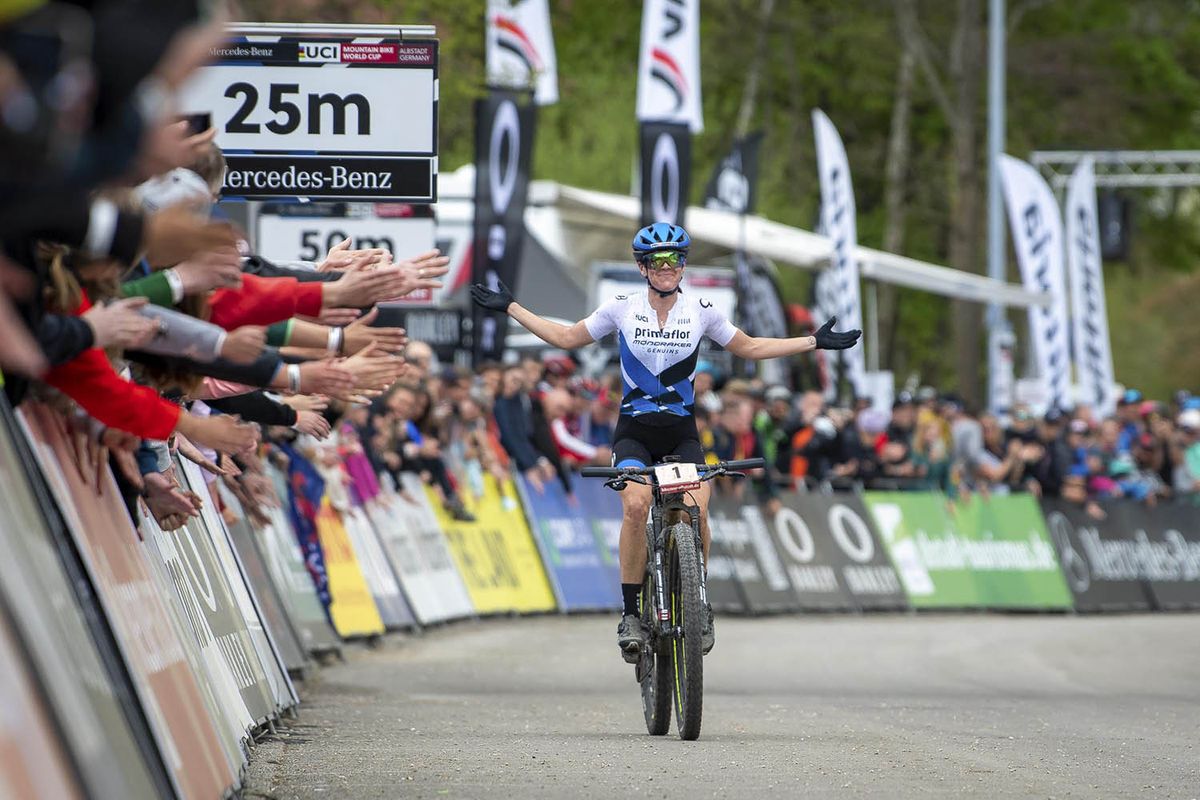 Rebecca McConnell (Primaflora Mondraker Genuins) became the fifth woman to have had a perfect World Cup weekend on Sunday – winning the cross country (XCO) after a victory in the short track (XCC) on Friday. McConnell dominated round two of the XCO in Albstadt, Germany for his second straight World Cup win, extending his lead in the overall standings. 2016 Olympic champion Jenny Rissveds (Team 31 Ibis Cycles) took second place, the only one to finish within a minute of the Australian champion.

The leaders would ride together steadily over the next few laps as the chase narrowed to Lecomte, Ferrand Prevot, Keller and Mona Mitterwallner (Cannondale Factory), the under-23 rider moving up a class. Ferrand Prévot would fade on the final two laps to finish seventh, while Mitterwallner dropped Lecomte on the final lap to take third.

Rissveds attempted an attack on one of the climbs on lap 3 but McConnell quickly responded and then the Aussie launched her own attack on the next lap and her Swedish rival had no response. McConnell’s fourth lap matched the fastest lap of the race (Rissveds on lap one), and the World Cup leader clocked another lap under 14 minutes for the fifth and final circuit, eventually pulling away to win by 48 seconds.

McConnell has now opened up a commanding lead in the overall World Cup standings after two rounds with 620 points. Anne Terpstra (Ghost Factory) is a distant second with 373 points, Mitterwallner moving from fifth to third place, 16 points behind.

“Jenny and I have very different strengths,” MConnell explained, “so she can play a little bit more and I need consistent speed throughout the race. I knew she was playing me, so I was just trying to be patient, but after [the start of lap 4] I knew I had to give it a shot. When I made my move, I managed to get it to hold.

“It’s just amazing…there are no words for it. Today the plan was to enjoy every moment for today…whether it goes really bad or really good. Just enjoy this moment wearing the leader’s jersey with the number 1 on the front of the bike. The goal remains the same – racing well, no expectations.”

Watching some of Ohio State’s most notable ‘five’ sports