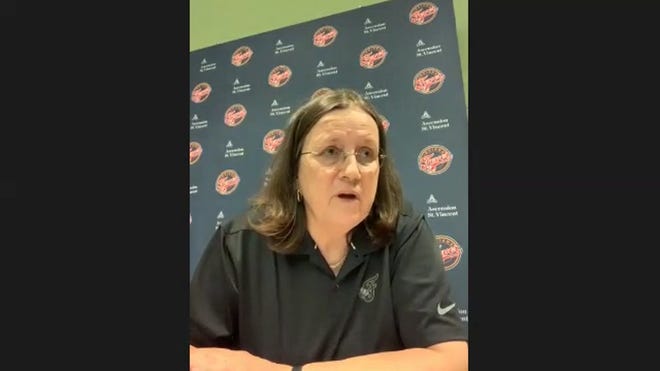 As Kelsey Mitchell slid into her chair after Thursday night’s game, her jersey was soaked in sweat. She had just played one of the better halves of her career but couldn’t be satisfied with it. His effort was grandiose, but too late.

Mitchell’s game-high 24 points, all in the second half, only made a dent in Fever’s 89-64 loss to the Dallas Wings at Indiana Farmers Coliseum. Playing at home after a five-day hiatus made Indiana confident he would take a win. After a great week of training, the 25-point loss was even more disappointing.

“There is always an opportunity when you play against teams that are young but bring energy that comes to you,” said Mitchell. “It was a great opportunity, but unfortunately we didn’t do the job at all well to be honest.”

With the loss, Indiana’s losing streak (1-15) goes to 11. The Fever don’t play again until July 1, which means they spent the entire month of June winless. In the last few games, the improvement was visible. Only the flaws were clear Thursday evening.

Indiana has had its worst start to the season. Led by Satou Sabally (15 pts) and Arike Ogunbowale (10 pts), Dallas quickly took the lead. The fever helped the Wings soar with their terrible ball safety. Indiana ended the game with 22 turnovers, gifts Dallas happily accepted.

“They scored 19 points out of our 22 turnovers,” said Fever coach Marianne Stanley. “You can’t play like that and expect to win.”

The Wings held Indiana to 24 points the entire first half. Mitchell didn’t contribute to any of them. 0-8 off the ground and frustrated, the vet knew she should come out focused if she had a chance to make a difference.

“I had to change my mind to the point of entering the competition,” said Mitchell.

Mitchell didn’t just compete in the second half she dominated. Mitchell scored a career-high 16 points in the third quarter and started the Fever’s offense alongside Jantel Lavender (14 points).

Indiana would reduce Dallas’ 19-point lead to eight, but then quickly relinquish a 6-0 streak. Defensively, the Fever has been prone to lapses all season, but without defensive anchor Jessica Breland, who injured her right knee in the first half, Indiana was particularly vulnerable.

The Wings had six double-digit players and topped the Indiana bench 46-6. Indiana stayed with Mitchell’s warm hand in the second half, but that meant nothing to Teaira McCowan or Danielle Robinson, options that are necessary for Indiana’s success.

Essentially Indiana was carried by Kelsey Mitchell in the second half and reducing the deficit to eight with 4:02 left in the third quarter was the best she could do. Fighting to come back takes away the energy it takes to win the game.

“It’s very taxing, man,” Mitchell said. “Mentally you have to find a way to keep competing… when you see a team running and you do everything to stop the race, it’s difficult. ”

In the fourth quarter, Dallas put their final imprint on the blowout with a 3-point shooting push from Marina Mabrey. The Wings had their best quarter of the game and didn’t stop.

It wasn’t necessarily a shock.

Indiana has proven in spurts this season that it can compete with the best in the league. The Fever doesn’t know how to win yet, and no one wants to be the team to help Indiana solve the puzzle. Fever’s record, ironically, gets the best of its competition.

“We are now a team to not lose against,” Lavender said. “So we have to know that we are going to get their best game and that people are going to come out and make sure that they are not the team to lose to us, so we have to have that sense of urgency to understand that and I don’t think we have this yet. ”

Knowing that Indiana has to face teams with an advantage certainly doesn’t bode well for turning the season around. Three more home games could. The Fever returns to Indiana Farmers Coliseum on July 1 for a two-game streak against Connecticut before ending the homestand against New York.