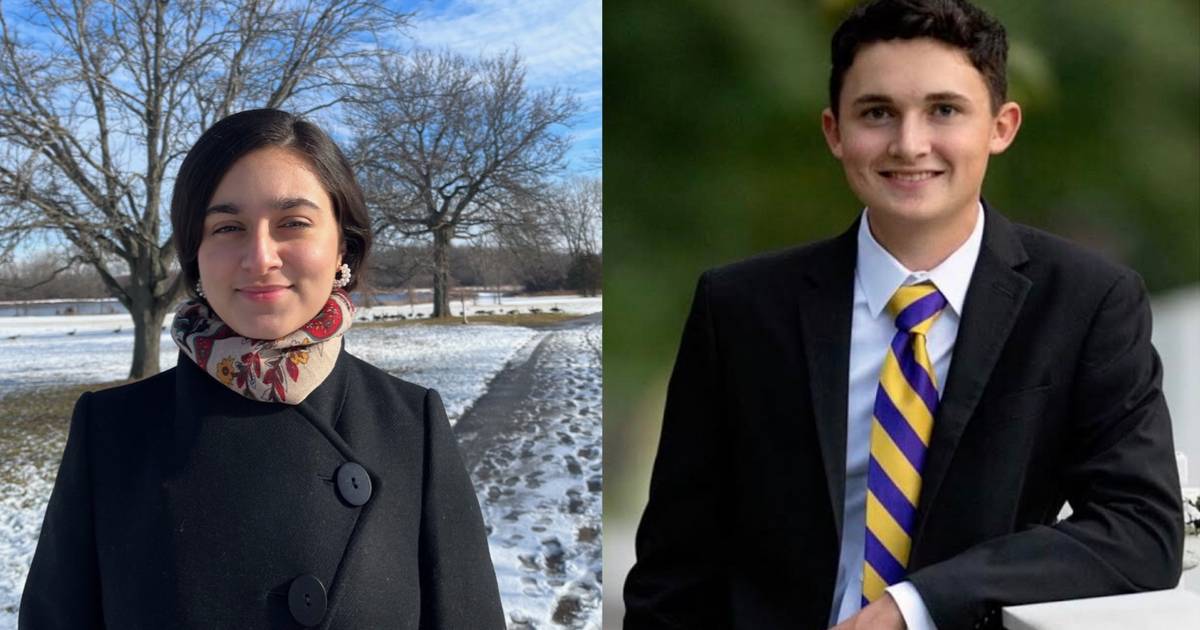 Ross Bodine of Sherman and Esees Komal of Schaumburg were selected as top student leaders in the state to be part of the national delegation of 104 students who will also each receive a $10,000 college scholarship for undergraduate study. Due to the ongoing pandemic, the 2022 program will take place online, via a comprehensive and highly interactive virtual education and leadership forum.

The USSYP was established by Senate Resolution 324 in 1962 and has been sponsored by the Senate and fully funded by the Hearst Foundations since its inception. Originally proposed by Senators Kuchel, Mansfield, Dirksen and Humphrey, leaders of the Senate at the time, the thrust of the program, as Senate testimony indicates, is “to increase the understanding of young Americans of the interrelationships of the three branches of government, learn the caliber and responsibilities of federally elected and appointed officials, and emphasize the vital importance of democratic decision-making not only for America but for people around the world .

Each year, this highly competitive, merit-based program offers the most outstanding high school students—two from each state, the District of Columbia, and the Department of Defense Educational Activity—a week-long intensive study about the federal government and the people running it. The overall mission of the program is to help instill within each class of USSYP student delegates a deeper knowledge of the American political process and a lifelong commitment to public service.

In addition to the program week, the Hearst Foundations provides each student with a $10,000 undergraduate college scholarship with incentives to pursue courses in government, history, and public affairs. All expenses for Washington Week are also provided by The Hearst Foundations; as stipulated in S.Res.324, no government funds are used.

Ross Bodine, a senior at Williamsville High School, is the senior class president. He has been a member of the National Honor Society for three years and was elected president of the section. He has done more than 60 hours of community service, including helping with the outreach mission of the Sisters Hospitaller and volunteering at St. John Vianney Catholic Church.

As chapter president of the National Honor Society, Ross is charged with finding new ways to provide service to his community. He has been involved with Illinois Youth and Government, which teaches high school students the importance of government and enables participation in a model of state government that mirrors the Illinois General Assembly.

Through this program, Ross served as a legislative aide, representative, and even a gubernatorial candidate. Finally, he was a member of the Student Steering Committee for Youth and Government, which is a statewide council that finds ways to improve the curriculum.

Ross’ future plans are to attend a four-year college majoring in plant biotechnology.

Esees Kaur Komal, a junior at Schaumburg High School, serves as the appointed representative to the student body. Her involvement in politics began in eighth grade when she worked with Congressman Raja Krishnamoorthi and the Humane Society to ban animal sales in puppy mills in Illinois, a bill that recently passed. been adopted.

She spoke at the Parliament of the World’s Religions, at the Fridays For Future climate strike, held workshops on the Indian farmers’ protest, and interned with her congressman and state representative. Esees is also an appointed member of the Junior State of America Cabinet where she inspires students to recognize their power as members of a democracy.

His future plans include majoring in political science and a law school.

Delegates and alternates are selected by state departments of education nationwide and by the District of Columbia and Department of Defense Educational Activity, after nomination by teachers and principals . The head of public school in each jurisdiction confirms the final selection.

This year’s Illinois delegates and alternates were nominated by Carmen I. Ayala, state superintendent of education.

During the week of the program, student delegates will attend online meetings and briefings with senators, the president, a Supreme Court justice, heads of departmental agencies, among others.

In addition to outstanding leadership abilities and a strong commitment to volunteer work, student delegates rank academically in the top percent in their states among high school juniors and seniors.

Today, more than 6,000 alumni of the program continue to excel and develop impressive qualities that are often geared toward public service. Among the many distinguished alumni are: Senator Susan Collins, the first alumna to be elected as a U.S. Senator; Transportation Secretary and former South Bend Indiana Mayor Pete Buttigieg; former Senator Cory Gardner, the second alumnus to be elected as a United States Senator and the first to be elected to the United States House of Representatives; former New Jersey Governor Chris Christie, the first alumnus to be elected governor; former Chief Justice Robert Henry, United States Court of Appeals for the Tenth Circuit; former ambassador to West Germany Richard Burt, former presidential advisers Thomas “Mack” McLarty and Karl Rove.

Each year, the program’s honorary co-chairs are the Vice President of the United States and the Senate Majority and Minority Leaders.