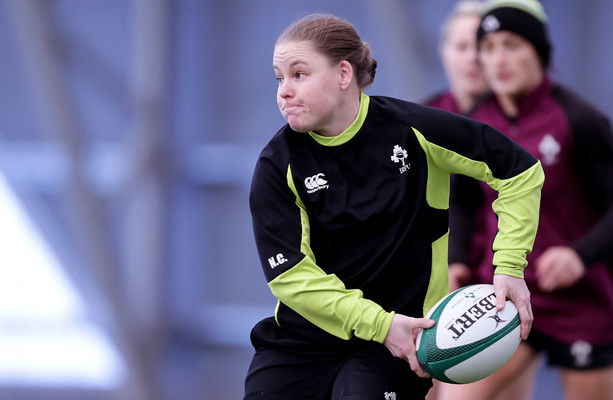 FOR A TIME it looked like a Six Nations defeat to England in February 2020 would be Nicole Cronin’s last cap for Ireland. A sportsman’s life often takes unexpected twists and turns, but at the time, Cronin had no idea what was in store for him.

The talented scrum-half had been in and around Irish teams since the 2017 World Cup, but as Covid arrived and wreaked havoc on the sporting calendar, it also appeared to halt Cronin’s development as a rugby player international dead in its tracks. The phone stopped ringing when then-manager Adam Griggs decided to go in a new direction.

“It was unbelievably difficult,” admits Cronin, the player who can openly discuss that tough time now that she’s back in the squad, having been rescheduled to play in the semi-finals.

“I had conversations with coaches and they had their opinions. It was just about leaving, working on your game. I didn’t know, though, that I would change positions at this point! I left and I worked on what I was told to work on, which could potentially get me back into a team.

It hurt, but I think it led to me having probably one of my best seasons with Munster and Bohs (UL Bohemians), to be honest. The goal was probably to come back here. I wanted to see a green jersey again because I didn’t want that to be how it ended.

Last weekend, Cronin won his 17th cap for Ireland, and his first as a 10-year-old. We understand why her coaches saw fit to move her among the half-backs.

A player of great skill and a superb passer, Cronin brings energy and invention to the 10 shirt, a position that has become problematic for Irish teams.

His move also allowed Stacey Flood to offer his playmaking abilities from the center, with the pair working well together in the loss to Wales. As with many areas of this Irish side, there are some creases to iron out in their relationship on the pitch, but early signs are promising.

“(It’s) incredibly nice because Stacey is also left-handed, so that gives us both options,” Cronin continues.

It’s not like a typical 10 is the only playmaker. We now have a playmaker on both sides of the ball, so if you’re in a position where you don’t turn the corner for some reason, then maybe Stacey will step in. She does a terrific job to be honest.

It will be interesting to see how this latest semi-final experience plays out for Ireland, with the move being overseen by new head coach Greg McWilliams and former Irish 10 Niamh Briggs. Briggs is a former teammate of Cronin, and the pair have been close ever since the relationship grew to one of player and coach.

Cronin also has extensive sports experience to draw on, UL Bohs featured a talented football player before deciding to focus on the oval ball.

“I played both rugby and football growing up and got to a position where you kind of had to make a choice, it just wasn’t doable because there were opportunities on both sides” , she explains.

Cronin and Briggs as teammates in 2018.

“At the time, football was where I wanted to go. I was tipping, getting involved with Irish minors and a video of a competition in Croatia [European U19 Qualifiers in 2010] obviously headed for America. I went to Kansas but the coach there was from Cork so I think he was watching…I ended up going to the US before I got my Leaving Cert results, my parents got them!

“I went to Hutchinson (Community College) for two and a half years, almost three. I had an amazing time, but I ended up falling in love with football. It had nothing to do with the United States. I have just, for some reason or another, reached what I would call an end point. I came home that summer, I had a year left in my degree, but I felt like it wasn’t for me anymore and I stayed here. I don’t have too many regrets about it, I still think it was the right decision for me.

Back in the squad and set to start their second consecutive game at half-time when Ireland take on France today, it certainly looks like that.

Cronin has played 10 at club level but admits she still has a lot to learn about the position. She hopes the footballer in her can help with the transition. She pulled off a great conversion from the touchline last weekend and in the remaining Six Nations matches in Ireland she will be looking to show more of her attacking threat with the ball in hand.

I never really thought football and rugby would work together, but I think it does at half time, it helps to know how flat I can or can’t be sometimes. It’s definitely speed, it’s not too different from getting the ball at your feet in the middle of the park in football and looking to reveal yourself. I see a bit of variation there, to be honest.

Its development as a semi-finalist will take patience and a lot of hard work, which is a familiar theme around this new Irish side.

Get closer to the stories that matter with exclusive analysis, insight and debate in The42 Membership.

Having lost so much experience between the end of the Adam Griggs era and the start of the McWilliams era, it feels like Ireland are almost starting from scratch. In France today, 24-time capped Eimear Considine will once again be Ireland’s most experienced player on the pitch.

The team are also looking to implement a new game plan, based on open, attacking rugby that allows the players to be the decision-makers – much like what we’ve seen from the senior men’s and U20 teams over the past two last months.

These things don’t happen overnight, of course – again Andy Farrell’s side are an example of this – but there were encouraging signs against Wales at the RDS.

France promise to offer an even tougher test in Toulouse today, but win or lose, Ireland’s goals are longer term.

“It’s like anything else with a new group and it’s not just a new group of players, it’s also a new management group,” Cronin said.

Everything takes time. The pressure will rise, everyone wants to win, we are not naive but you just have to be a little patient, it will take time but there is something special in this group.

“We also have to understand that these Six Nations, five other teams have another goal, their goal is to go to the World Cup and play well with them, they qualified and we didn’t, so our goal is to be in a fairly good position early next year.

“That’s not to say we’re not aiming this year, but we just have to be very realistic about what to expect from the different teams that will be at a World Cup. They throw different shots and we’ll be prepared for that. this and will come out doing our best every week, but we’re just in a very different situation. There’s something good growing. We’re just asking for a little patience to be honest.