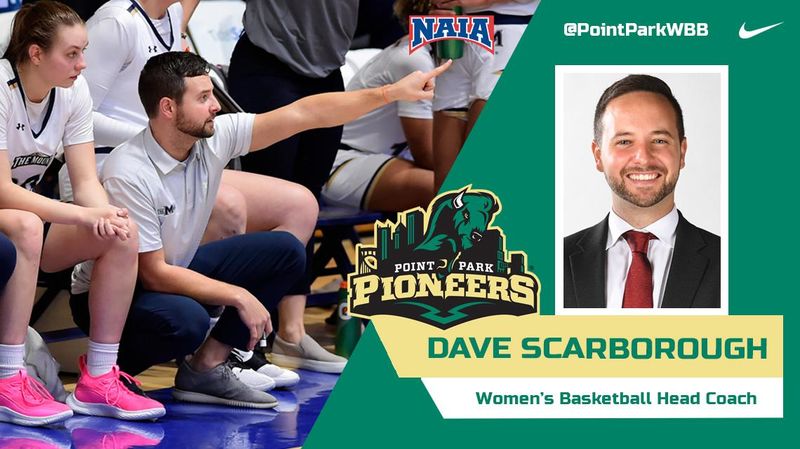 PITTSBURGH – Point Park University athletic director John Ashaolu is pleased to announce the hiring of Dave Scarborough as the next women’s basketball head coach for the Pioneers.

Scarborough, a Pittsburgh native, has spent the past nine years as an assistant coach in women’s basketball at the NCAA Division I level. His college basketball career spanned the past 14 years in total, 13 of which were in NCAA Division I.

“After conducting a nationwide search that attracted applicants from the highest levels of college basketball, I’m very excited to welcome Dave to the city of Pittsburgh as our next Women’s Basketball Head Coach,” Ashulu said. “Dave is a person of character who is dedicated to academic and competitive excellence as well as the overall development of the student-athlete.

“Dave’s coaching experience has allowed him to be successful at the highest levels. He has been an integral part of teams that have won conference championships and entered the NCAA Tournament as recently as last season at Mount St. Mary’s University. Dave has been successful in recruiting in the area and has deep relationships in the area. I believe her ability to cultivate relationships and develop talent along with her keen coaching acumen will position our women’s basketball program at the top echelon of the River States Conference in the very near future.”

“I am extremely grateful to return to Pittsburgh and have the privilege of coaching, mentoring and developing female student-athletes as a head coach at Point Park University,” said Scarborough. “A huge thank you to Point Park Athletic Director John Ashaolu, President Dr. Don Green, Vice President Keith Paylo, the current women’s team and the entire recruiting committee for entrusting me with this opportunity.

“I also want to thank the Mount St. Mary basketball program, especially head coach Antoine White for giving me the platform, the confidence and the voice to sit in this seat. My wife Amanda and I are excited to begin this journey with the Pioneer community!”

“Having met and worked with the current roster, I am excited about the potential of our program for this coming season,” added Scarborough. “My team and I will continue to work on player development throughout the spring/summer and look to add key recruits.”

Scarborough replaces Tony Grenek, who resigned after 11 years and a 206-101 record in 10 full seasons. Scarborough is the 17th head coach in Point Park women’s basketball history, a program that was established in 1978-79.

Scarborough helped Mount St. Mary’s to the NCAA Tournament in 2021-22 as top assistant coach. This was his first year on staff at the NCAA Division I school located in Emmitsburg, Maryland. The Mount won the Northeastern Conference title to secure their March Madness bid.

In the previous five years, Scarborough served as an assistant coach at NCAA Division I Sacred Heart University in Fairfield, Connecticut from 2018 to 2021. The last three years of this stint were as a coach – associate chief. Sacred Heart had a 46-27 record in the NEC over those five years and made two WNIT appearances.

From 2013 to 2016, Scarborough was an assistant women’s basketball coach at St. Peter’s University in Jersey City, NJ. His three seasons there included the last two as an associate head coach. Scarborough was part of the Peacocks’ first MAAC Tournament win in eight seasons.

Scarborough made his college basketball coaching debut as a men’s basketball assistant at La Roche College for the 2008-09 season.

Scarborough received his undergraduate and graduate degrees from the University of California, Pennsylvania with a Bachelor of Science in Commerce (Sports Management) in 2009 and a Master of Science in Intercollegiate Sports Administration in 2012.

Scarborough grew up in the Highland Park neighborhood of Pittsburgh. He graduated from Fox Chapel High School. He resides in Edgewood.